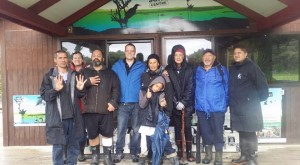 Today is Wednesday, 10 August, 2016l
I have just returned from our 8th Bird Translocation programme which was
carried out at Urupukapuka Island.  Rana, BJ and Rob came here Monday
morning when I gave them a karakia of blessing before they went to Pureora to
locate and bring back 10 female toutouwai for their ‘partners’ wh/which had already been
translocated in earlier months..   The team which went down consisted of Rana,
Rob and BJ – very familiar with the process and with their overall experience
have got it down to a fine art!.   We are so fortunate to have this expertise
amongst us – mind you, with the support of Fleur and her team of the Guardians
of the BOI and Project Island Song.   This is a classic example of teamwork
between tangata whenua and ‘outside’ organisations working together with a
common interest in mind.
The day was a bit cool and wet when Rana picked me up to catch the boat at
Kaimarama but  with these sorts of expeditions (for want of a better word!) the
focus is on the birds and not dependent on the weather.   So, the DOC boat took
us – Hone and Gloria, Hiko Tauariki, Rana and Viki, Rob, my mokopuna Te Taonga,
and we were met by Richard Robbins at the wharf.
The first thing that ‘caught’ my eye on arrival was that the Cafe was closed!!! – ok whanau,
you know what I mean don’t you???!!!!
We were met by Kevin Parker and BJ who had already laid the boxes out containing
the birds.   As we approached the place where Kevin and BJ and the boxes were,
our Apotoro Hone Matenga did a mihi ‘whakatau’ – referring to the homeland of these
taonga of ours whom we had ‘translocated’ from their ‘turangawaewae’ to a ‘new/different’
place of environment, but all within the realms of Tane Mahuta.
After the birds had been released, all of us taking turns in releasing our treasures, our
kaumatua Hiko Tauariki, then presented/offered two taonga to commemorate the occasion –
one is in the form of a walking stick and the other was a whales’ tooth.
Personally, I want this korero and these taonga to be presented in our Whare –
nd I shall follow that up
To get back to the kaupapa, after the formalities, we all congregated on the wharf where
the Tangaroa had berthed – sparkles in my eyes!! because my mokopuna Lynette was part
of the staff (but actually) the bar staff!!   so  you can guess what’s coming next?????
Thank you people, end of my ravings!
Na te Kuia nei