The Latest About the Pest Control Projects

Because the pests were swimming between the mainland and the islands, projects were set up to form a buffer or defence zone along the coastline from Huruhi Bay to Kaimarama Bay. This mainland pest-controlled buffer has three parts, see map:

The buffer has been established under the guidance of pest-control experts from the New Zealand Kiwi Foundation (NZKF), Northland Regional Council (NRC) and Department of Conservation (DOC). The combined mainland buffer has now been fully operational for about two years.

Project Strip is the first line of defence for the pest-free islands and is funded by the EBoIPS – the Eastern Bay of Islands Preservation Society. Local people from Rawhiti (Ngati Kuta and Patukeha) are employed as trappers by Te Rawhiti Enterprises Ltd (TREL) to service Project Strip. John Booth (Mainland Pest Control Co-ordinator for EBoIPS), administers the project and John Clendon and Rana Rewha are the main trappers.

Project Points’ traps and bait stations at Omakiwi, Orokawa, Kokinga and Omarino peninsulas are also serviced about fortnightly, all but those at Orokawa by the landowners’ own trappers or by TREL with funding from the landowner. Orokawa is presently serviced by TREL, largely from DOC grants, but will eventually be funded by the landowners themselves.

The Te Rawhiti Peninsula CPCA is also a crucial part of the mainland buffer, established in 2009 by NRC and serviced by locals with financial assistance from the landowners. 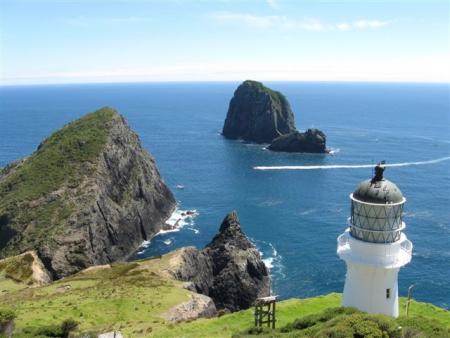 The fourth project is the Cape Brett (Rakaumangamanga) Peninsula (the large blue area on the map). The Te Rawhiti CPCA, together with Nga Whenua Rahui and DOC are working with local hapü on pest eradication on the Cape Brett peninsula. The main trappers here are Alvin Rewha and Darryl  Collier.

Over the last 2 years, Francis Hepi and Iti Arama and others worked out there but funding has reduced so they are working in other jobs. Nga Whenua Rahui has been a major contributor for the 3B2 Trust lands and DOC for the DOC estate. 3B2 Trust who own the lands have loaned money to keep its lands pest free but expect their money to be repaid. Funding is being sourced for the DOC estate as their funding is minimal this year.

All of the projects have created a formidable mainland coastal pest-controlled zone. John Booth says, “In just over a year, local people have begun to see more tomtits, tui, and fantails – even some bellbirds in the Project Points and Strip areas. It is tempting to see this as a direct result of our intensive pest control being carried out in this neck of the woods.”

Northland Regional Council Pest Management Officer Mike Knight, believes that this is one of the most impressive and fastest-growing CPCA’s in the north. “We may have been the first to start on the mainland with the CPCA at the end of the Rawhiti Road, but now we can hardly be seen for the dust! This is all the more remarkable because most of Rawhiti Road has recently been sealed!”

The Te Rawhiti CPCA, now in its fourth year, has a network of bait stations and kill traps targeting mustelids, rats and possums spread over 460 hectares. This significantly reduces the chance of reinvasion by animal pests to the islands of the eastern Bay. Rana has been doing a great job.

We are all looking forward to the day when the birds that used to be in Ipipiri return there under their own steam, or can be helped back. The better we work together at keeping these islands rodent- and stoat-free, and the pest numbers low in the mainland buffer, the sooner that day will come. The challenge now becomes how we extend that good work and how far back can we push to extend the control. This depends on funding.