If you’d ever wondered about growing and propagating native plants? Where here’s a great guide to making it happen. Our native flora need to be planted at the right times and cared for, just like any plant, starting with a nursery for little seeds.

A shaded, fenced, sheltered position should be selected on high ground preferably with the ground falling away all round. Schools are not debarred from taking part in this movement on account of no suitable ground being available, because excellent nursery work can be done with seed boxes.

For each kind of seed a separate bed, the size varying from a square foot to a square yard according to requirements should be excavated, not more than one foot deep, and filled with special soil. These beds need not be together. Some will grow under very damp conditions, for example, Maire-tawhaka ((Syzygium) Eugenia maire) which can be sown in the bottom of a slow-running creek, but the majority of seed require a moist well drained situation. Schools dealing with clay soils should put stones at the bottom of the excavated beds, and arrange an outlet drain, otherwise the bed will act as a basin and become waterlogged.

The soil mixture put in the excavated bed is often the deciding factor in success. Different seeds require different soil mixtures but on average the most successful results are obtained with the addition of: 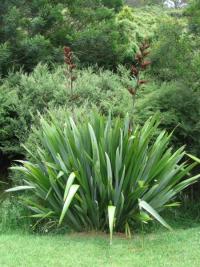 These are essential for some seed, and in some general give better results than the open ground. Moisture, shade, shelter, and warmth are easier to control by this method. The orthodox seed box is used. In some nurseries boxes are placed in an excavation in the open.

Schools are advised to try the seed box method first. Beginners often fail with seed in open ground, but usually get some seedlings to grow in seed boxes.

The planting seas in Northland ranges from May to September. As a general rule plant as early as possible in light dry areas and late in low-lying damp country. Late planting generally gives the best results, but for school purposes it has disadvantages that trees require attention during the Christmas holidays.

The commenest are lack of drainage, insufficient shelter, no protection from stock and scorching in the summer.

Seedlings such as Taraire sown last spring will be ready to transplant the following spring, but there is no necessity to do so unless the seedlings are too close together. With a spade or trowel, loosen under the roots of the seedlings and pick out those that too close. Plant them in narrow seed beds or rows.

They will not require wrenching until the next season, but to facilitate this work, rows should be 18 inches apart. In general, all seedlings sown last spring will be ready to transplant at the end of April, provided that the weather is not to dry.